I’d love to tell you I’m refreshed and relaxed and invigorated and all that, but it would be something of a lie if I did. Just who thinks it’s a good idea to take their 14-month-old on honeymoon, anyway?!

So wedding chat will have to wait til I’ve summoned some reserves of brain power, but in the mean time, here are a few photos of Puglia, where we “honeymooned” for ten days. (Quotation marks because it was, without a doubt, the least romantic holiday my partner and I have ever taken together. Ha ha, still, we’re promising ourselves a more romantic weekend break at some point before Christmas, which we might deem our official honeymoon. A romantic weekend break just the two of us.)

Not to grinch and moan though. Puglia was beautiful. The weather was great. Our trullo was delightful. And, of course, we got to eat lots of Italian food.

The area we were staying in was, by fortune rather than design, right in the centre of the Vallee d’Itria — a stunning agricultural area almost at the very south of Italy. Every field was given over to olive trees, vines or figs. The earth here is a deep red colour and the contrast of red earth and silvery green olive trees was mind-staggeringly beautiful.

We managed to visit a few of the local towns (the sproglet very much on sufferance the whole time). Closest to us was Alberobello, a town designated a Unesco world heritage site for its proliferation of trulli. Streets and streets made up of the distinctive conical-hatted buildings.

Our own accommodation was also a trullo. Once the typical house of a peasant, now, of course, they’re super popular with tourists.

Also close by, we had a nice trip to Ostuni, one of the “white cities” of the region, whose architecture looks more Greek than Italian. We wandered little lanes (with the pram. Not intelligent with all the steps) and had an amazing lunch in a courtyard down a tiny side street. 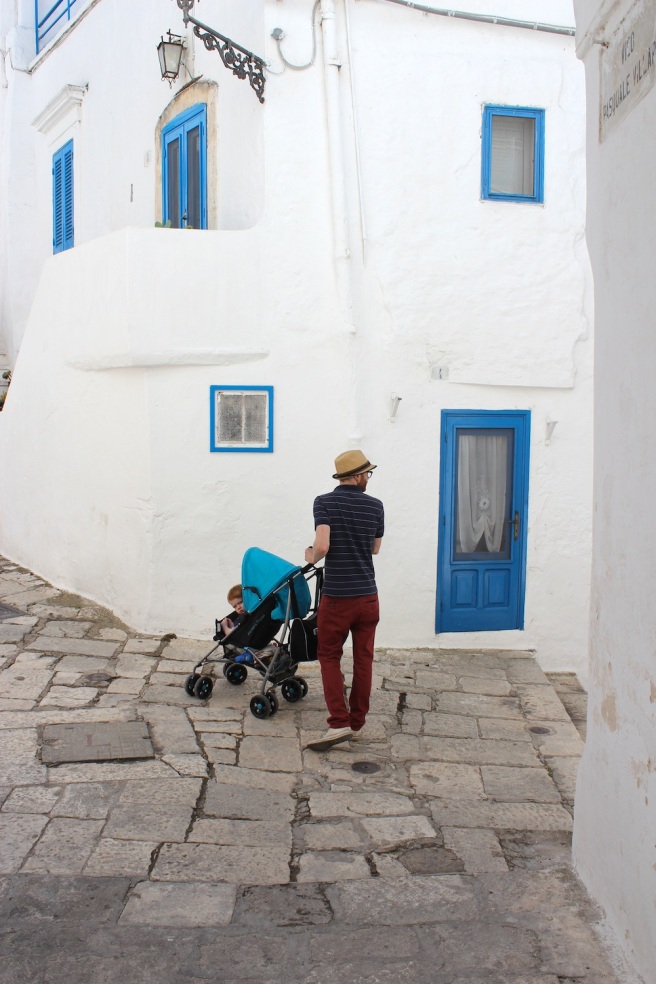 Of all the lovely towns, restaurants and general Italian things to do, though, the sproglet was interested in one thing and one thing alone. The beach.

For now, it’s quite nice to be home to what, this morning, is looking to be a good season of mists…

Hello hello, lovely to see you, thanks for stopping by my blog. I'm Sabrina: crafter, gardener, writer and inveterate waffler. This blog is where I share my makes, garden plans and attempts at small-scale sustainability and self-sufficiency in London.

If you want to know more, have a browse, or find me here: