Last Sunday, we strapped the sprogs into their car seats, cracked the windows open to let in some warm summer breezes and set off along the A3 heading for RHS Wisley.

I wasn’t sure how enjoyable the rest of the Wolves in London clan were going to find the excursion; all of them so far too young /not-into-gardening to think that a thrilling day involves me wandering round examining flower beds and sharing fascinating snippets of information about Latin horticultural names or the biology of a plant’s roots. (More fool them…)

Actually, I was delighted at how family friendly Wisley was. There were only a few areas where I had to try and explain “Keep off the grass” signs to the sproglet.  There was a soft play area and a children’s playground. But, it says a lot about how much fun we had everywhere else, that we didn’t have time to visit either of them.

An arts and crafts fair was taking place that weekend (I know, double heaven for me: gardening and crafts!)

Lots of stalls were set up around the grounds with makers selling their wares and offering lessons in everything from pot-throwing to brooch making.

Had I been alone, I would have definitely tried my hand at these plant prints. I only had a very quick look, but I think they must be made with inkodye, something I have been dying (geddit?!) to try out for a while now. The effect is really striking:

The sproglet was particularly impressed with a collection of wire sculptures of animals, like this hare:

And, naturally, I couldn’t resist getting a photo of this wolf sculpture. (A friendly wolf! I’ve written before about how they’re pretty hard to find…)

There were also various performances going on during the day. This lady, in the glasshouses, was billed as an “aerial artiste”…

But, most fun was had just wandering through the impressive grounds themselves, which are full of quirky architecture and sculptures.

The sproglet dashed off in glee the minute he saw the pagoda:

But his attention was held for even longer by a rather impressive insect hotel.

(Side note: I think these look stunning, but any I have come across seem rather devoid of insects. Anyone have something similar in their own garden?)

Rather intriguingly, my friend Annie (of Nimble Fingers and Steady Eyebrows) tweeted me just as I was leaving and said that there was a statue of her somewhere in the grounds. Sadly, I didn’t see it, but I did enjoy this couple sitting and soaking up the view:

And the glasshouses, of course, were mind-blowingly awesome:

We spent a lot of time wandering round inside and, of course, I took hundreds of photos of plants. This is the (highly) edited selection… 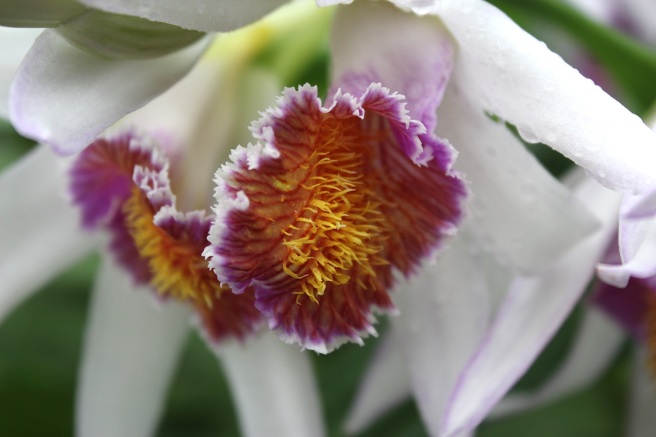 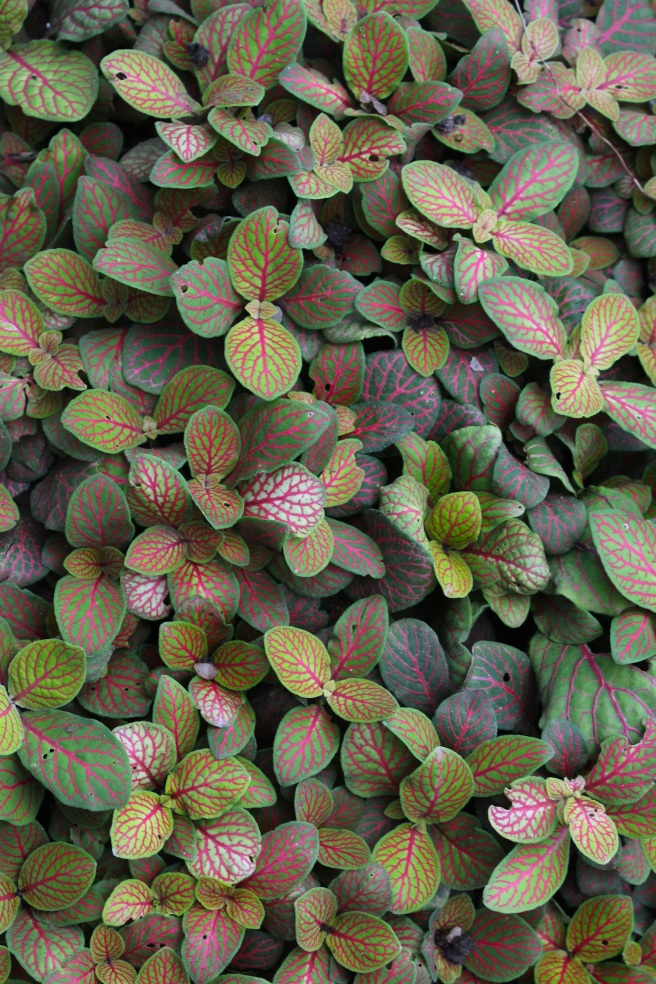 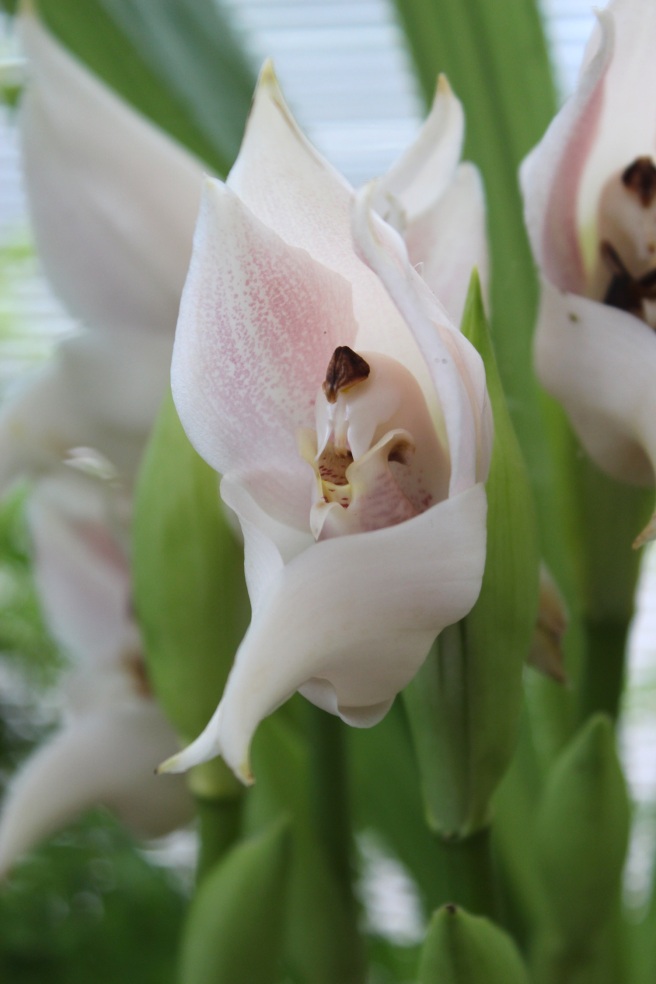 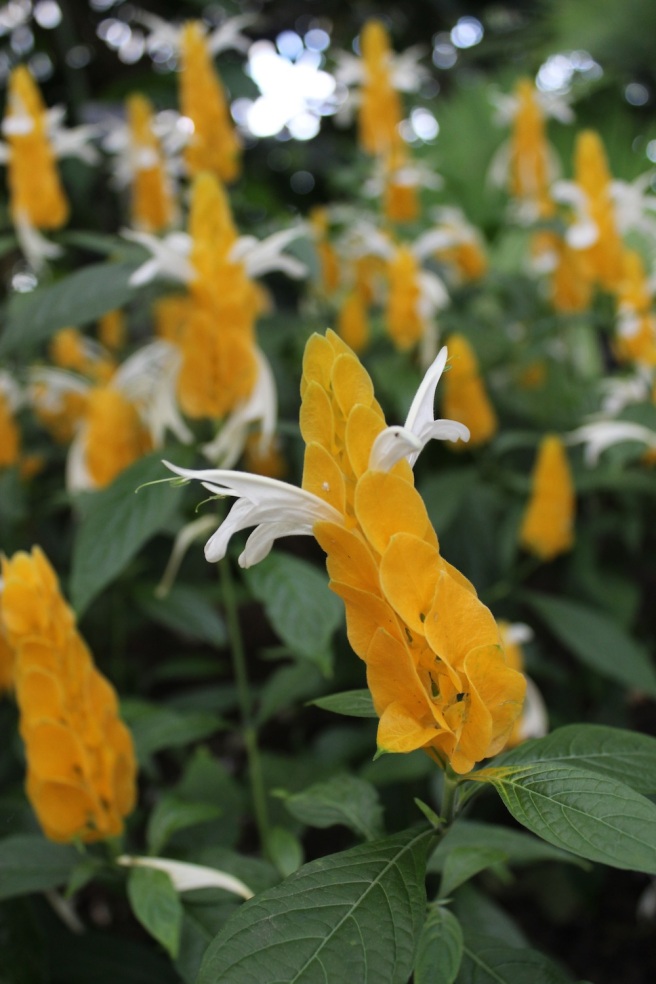 Rather foolishly, I was so busy being snap happy that I forgot to write down the names of any of these plants and I’m not really familiar with exotic flowers like this so I no longer have a clue what’s in the photos.

But no matter, for I’m saving the best til last. My very favourite part of the gardens was the more naturalist drift planting, just outside the back of the glasshouses. This is the look I aspire to in my own (much, much, much) smaller flower beds.

And I was very excited to see lots and lots of Mexican fleabane (Erigeron karvinskianus) growing out of walls and steps all over the place. I just bought some for my own garden and have planted the little plugs over the stone wall that divides one of my flower beds from the lawn. The first little daisy-like flower appeared yesterday, to my immense delight:

Aaaaand, that’s the end! Lots of photos, but still only showing a mere fraction of what’s there. I shall be returning soon, no doubt.

I also purchased some rather glorious second hand gardening books, but this post is already heejusly long so I’ll show you them another time…

The hubby is off work for five weeks now between jobs, so we’ve got plenty of time for exploring. Anywhere else we should go?

{Joining in with Manneskjur and How does your garden grow? If only this were my garden!)

Leave a Reply to Wolves in London Cancel reply

The mantelpiece a few weeks back, basking in some Spring sunshine. This is just my very favourite time of year…
If you’ve followed me for a while, you may be remember me mentioning that I really hate driving. It makes me feel super anxious, especially with the kids in the car, and living in London definitely doesn’t help. I’ve been meaning to crack my fear for years now but never quite managed, but I’m determined to try and make some progress this year (it can be a huuuge pain always schlepping about with three kids on a bus).
Oh but I just love Spring. So happy to see these beauties back again this year (Narcissus ‘Bridal Crown’)…
Never not half-planning to move to Frome…