I always wonder, at some point in a blissful three day bank holiday weekend, whether every single weekend would be as good if everyone only worked a four day week all the time. Surely so much office working is just faffing around, chatting, making coffee, checking emails and so on, that actually it could all be squeezed into four days instead and the whole country could have three whole days off every single weekend? Anyway, such dreams are unlikely to become reality (and perhaps I would find then that I longed instead for a four day weekend?) but a bank holiday Monday is always a very delightful thing for me… …even though I don’t even have an office job to go to these days.

This Monday past, we set off for Eltham Palace, an English Heritage owned house and garden in deepest South-East London.

My latest garden design assignment is to create a planting plan for a London garden attached to a 1930s house; the planting needs to sit nicely with the period of the home. I didn’t know much about 1930s gardening, but a quick Google told me that Eltham Palace has some of the best 1930s borders in the country (and described it as a “gardener’s garden”) and Google maps told me it was a 25 min drive from our house. What luck, eh?!

The gardens were, indeed, stunning.

Along one side of the house, the formal gardens are set: a rose garden, a “linear” garden, a square pond and so on. In my research on 1930s gardens, I discovered that this was quite common in Edwardian times (and, indeed Arts and Crafts gardens, which were still in fashion in the ‘30s): more formal gardens, laid out often symmetrically, planted closer to the house, often in a series of “outdoor rooms” and then, as you got further towards the boundary, the planting became more naturalistic and wild, blurring where garden ended and open country began.

So, too, at Eltham. Across the most fabulous bridge from the moat, a meadow area was full of trees, grass and wildflowers, with a series of paths just mown into the meadow. This is an idea I absolutely adore and one I definitely plan to do if I am ever lucky enough to own a piece of land big enough to have a meadow…

Though the house would originally have been enclosed by the moat, nowadays only half is still filled with water. The section of moat at the back of the house has instead been turned into huge borders, flanked by beautiful old red brick walls.

Even the car parks were beautiful, in fact, this brick wall being one of the first things we saw when we parked the car:

Looking at the “1930s borders,” I’ve got to say, they looked like any contemporary flower borders to me, using all sorts of plants that I’ve learnt about in my course and love. I certainly wouldn’t have known that they were specifically from the ‘30s if I hadn’t been told so. 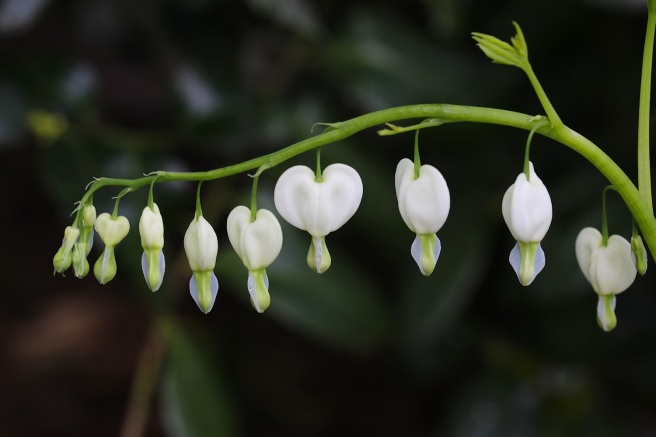 As for the house, well, that is the most fabulously 1930s place you could ever imagine. I’d left my camera in the pram (which wasn’t allowed inside) so I’ve got no photos, but it was a wonderful stroll round rooms preserved in their 1930s best: fabulously decadent gold mosaic-filled bathrooms; round windows all over the place; a special room (with central heating) for the pet lemur, called Mah-Jong (or Jonggy, if you’re on intimate terms) and walnut-panelled guest bedrooms. Given half a chance, I would have moved in then and there…

So, definitely worth a visit if you’re a garden lover, 1930s buff, or just fancy a wander round a nice house and grounds. We were talked into signing up to a year’s membership with the English Heritage at the entrance (you know, cos it ends up only costing three times as much as just paying to get in and that suddenly sounds like a great deal when someone says it to you enthusiastically) so I hope we’ll be visiting lots more places before the year is out.

A magical week in Umbria at @ahavenforstories. Morning mists, golden sunsets, a whole host of amazing writers who have become new friends, and the absolute best tutors: @noughticulture @elisevalmorbida and Tobias Jones. (I squeezed in a tiny bit of writing too 😉…) Am already planning my return next year.
Photographed by my oldest this afternoon in one of my favourite places to visit.
From a few weeks back in Vannes — browsing at one of the most beautiful bookshops I’ve ever seen…
Waking up back in my bed this morning after a lovely week in Brittany. Sea swimming, excellent food, window shopping in gorgeous French towns, a boat trip along the Golfe du Morbihan and fabulous company — thanks so much for having us @kellyoutofrange.