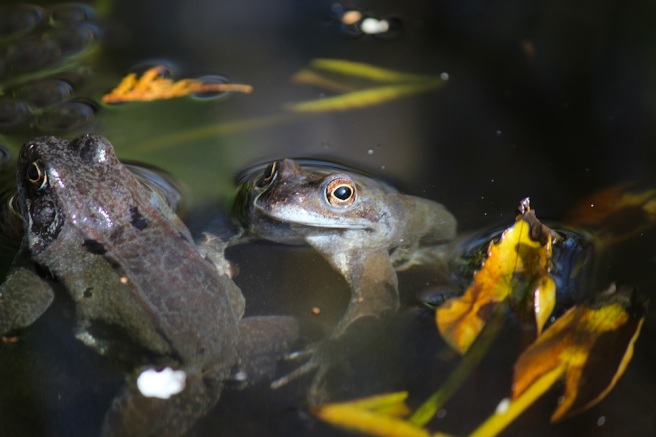 These past few weekends we’ve been digging out the pond from the bottom of our garden to convert it to flower bed.

I’d been agonising about what to do with the pond (as is my wont) for a good few years. On the one hand, the pond isn’t very safe for the kids, is under three apple trees so spends a large portion of the year full of rotting apples, and leaves a huge swathe of bed behind it completely unreachable and, therefore, covered in bindweed and more rotting apples.

One the other hand, it’s the home of huge numbers of frogs, which we all love.

Finally, the first argument won over, and so — with plans to put a new, smaller pond in place somewhere that’s not under loads of trees — we’ve decided to dig this one out.

Job one: removing the water and re-housing the resident frogs. Which was wildly, vastly more fun than I could have possibly imagined.

We thought we had a few frogs in there. If pushed to pick a number I probably would have settled on five. But, slowly removing all the water in bucketloads, we discovered about 30, including a couple of soon-to-be Mums, their bellies fat with eggs.

The boys and I watched on, impressed, as my husband caught them all in his hands and put them into a bucket of pond water. And then we set off, the four of us, down to the lake in the local park to set them all free for a new home.

The littlest was especially impressed with the frogs, pointing at them and yelling “Rog! Rog! Touch! Touch!” so we soon developed the routine that the hubby would get a frog from the bucket, hand it to the littlest, who then set it free beyond the fence of the pond.

(Where they mostly sat around looking perplexed for an alarmingly long time and I worried that the heron was going to swoop down and eat them at any second.)

By the third trip, we had gathered a bit of a crowd to watch the frog-releasing exploits, and even the sproglet and I gathered up enough bravery to also hold and release a frog of our own. We made a few new friends, had some good frog banter, and my husband was even called “a modern David Attenborough” — which I think made his year as Attenborough is his number one hero.

All in all, the perfect way to spend a Sunday.

NB In all the excitement, I completely failed to take any photos of the frog-handling / frog-releasing so instead you’ve got an old photo from a few years back of the frogs in the pond as it used to be (you know, in case you’ve forgotten what a frog looks like while you’re reading this…)

7 thoughts on “Release the frogs!”