Goodness, but it’s been a long time since we first got our chickens and I’ve been meaning to introduce them to you ever since.

Turns out, though, that chickens are seriously hard to photograph. I guess it’s all that pecking about. Getting them to stand still long enough for me to take a photo has proved almost impossible and so, seven months after I first started trying, I admit defeat and bring you some chicken chat along with some far from perfect photos.

As you might remember, the chickens were a Christmas present for the boys last year. Or rather, on Christmas day, they unwrapped a giant, empty chicken coop and a card saying, “we’re going to get pet chickens!” Turns out a three-year-old doesn’t think this is much of a present at all, so rather than waiting til the Spring, as we had planned, we set off a week later and bought our first three chooks in the cold months of early Jan, delighted to welcome Blanco, Ginger and Nero to our family.

I did quite a bit of research into breeds beforehand, as I knew I wanted something good with kids (obviously), who would make good pets and also, ideally, that wouldn’t cause too much damage in the garden.

Pekin bantams seemed the best bet and luckily we found a breeder relatively close by with some to sell.

They’re very small, compared to most chickens, and as a pure breed they don’t lay every day, year-round. (Hybrids have been bred who will lay almost constantly, even in the winter, but they stop earlier and die younger, which seems a bit of a shame to me…)

They’re insanely cute, with beautiful feathers, and fluffy feet, which means they’re not as keen as pecking around in flowerbeds as other breeds can be. And they’re very docile and good-natured, so they’re great with children. 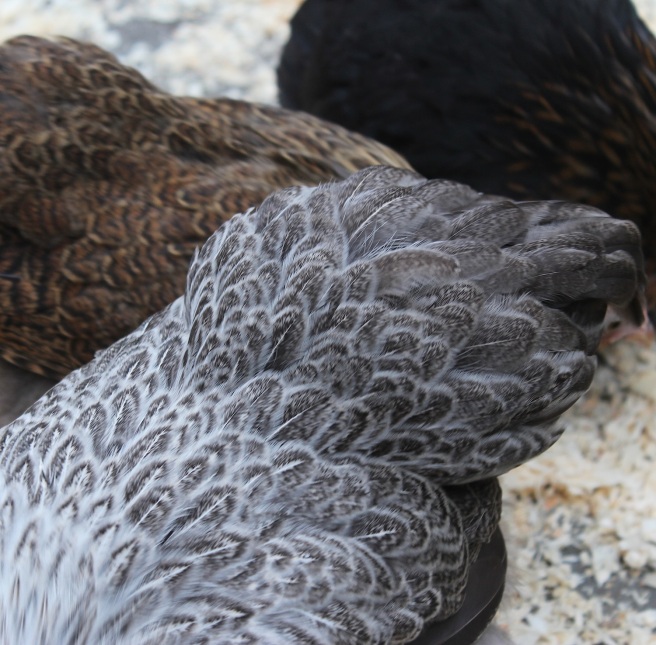 Their home is an Eglu Up, with an extended run, made by Omlet. It’s a ridiculously expensive system, but easy-to-clean, well insulated in the winter and fox proof. Ideal for an urban chicken keeper.

We had planned to put them straight onto the grass, but the breeder told us that they don’t like getting muddy in winter (those feet feathers again) so instead, for a good few months, they sat on our newly-laid patio, crapping all over it, and staining the sandstone with little white circles. We loved them so much, we didn’t care…

I used to let them free-range all day long, sitting watching them from the window inside on days when it was really cold. The three of them loved nothing more than to perch on our kitchen windowsill, fluffing up their feathers, picking off the occasional grub and having a little chat.

Until one day, in February, a fox darted into the garden and ran off with Nero, escaping over the back fence in the time it took me to run out, shouting, and trying to chase it away.

As a newbie, non-hardened, chicken keeper, I was completely devastated and spent most of the afternoon in floods of tears and, needless to say, the chickens now stay inside their run, unless we’re physically in the garden with them.

A few months later, we bought two new hens: Polka and Dot. It was slightly stressful trying to make sure they were integrated happily (I read countless horror stories about new chickens being pecked to death when they joined an older flock) but after a bit of abuse from Blanco in the first weeks, they now all rub along together really well.

Since the destruction of the gigantic greenhouse, we’ve moved the coop to a dedicated area at the back of the garden, where they have a layer of bark on top of bare earth, which I’m sure they’re much more happy about.

And now that it’s much warmer, it’s been much easier to let them free range, as I’m out in the garden on sunny days anyway. They peck about on the grass and seem to have a good line in eating weeds and not any precious plants, for which I’m pretty grateful.

But, of course, one of the biggest benefits of chickens are the daily eggs. After an eager wait, all four chickens are now laying and, on a good day, we get four gorgeous little browny-white eggs that, quite genuinely, taste far better than anything you could buy in the shops.

Popping out to the coop a few times a day and checking on the eggs has become a really enjoyable part of my day. There is something so utterly miraculous about the whole process.

But, that’s not to say chicken keeping has been 100 per cent plain sailing. One thing I didn’t appreciate before we got the chickens was what a pain it would be when they “go broody”.

Blanco has done so twice so far this year, meaning she sits on an egg, refusing to move and hoping, fruitlessly, to hatch a chick from it. (On our one-day chicken keeping course that we attended just after buying them, I naively enquired how you know if there is a chick inside an egg. The woman looked at me, a little bit surprised and said, “well, it depends if they’ve met a cockerel, doesn’t it?”)

We’ve yet to find a good way to solve the broody situation, despite trying a range of approaches from letting her get on with it (if they really were hatching eggs, the chick would appear in three weeks so they should snap out of it by then) to more aggressive things like putting her in a “broody buster” where she sits in a wire cage all day long which keeps her cool and doesn’t allow her to sit down.

None of them seem to have worked especially well, but the issue of chicken broodiness is a huge one, perhaps for another post.

Also, especially since Nero was snatched, I find the fox issue quite stressful. If I am in the garden with them and have to pop inside for a moment I spend the whole time worrying that a fox is seconds away from rushing off with them and every little noise implies imminent chicken doom. As a result, I tend not to let them out of their run unless I know I will be able to sit outside for a good stretch of time. And then, instead, I feel guilty that they’re not as free range as we had originally planned.

Basically, it’s maternal guilt all over again, just with chooks.

But, hey, I guess that shows you just how much I love them, right?!

A magical week in Umbria at @ahavenforstories. Morning mists, golden sunsets, a whole host of amazing writers who have become new friends, and the absolute best tutors: @noughticulture @elisevalmorbida and Tobias Jones. (I squeezed in a tiny bit of writing too 😉…) Am already planning my return next year.
Photographed by my oldest this afternoon in one of my favourite places to visit.
From a few weeks back in Vannes — browsing at one of the most beautiful bookshops I’ve ever seen…
Waking up back in my bed this morning after a lovely week in Brittany. Sea swimming, excellent food, window shopping in gorgeous French towns, a boat trip along the Golfe du Morbihan and fabulous company — thanks so much for having us @kellyoutofrange.