The impending pitter patter of baby feet inevitably sends me straight for my knitting needles.

True to form, in late pregnancy, I started on a baby blanket for the littlest. But, in rather typical third baby syndrome, I haven’t actually managed to finish that yet. (Ahem, she is nearly four months old now, so I really need to get cracking.)

When I was a week or so overdue, I became convinced that she wasn’t coming out because she was indignant at my inability to have completed a knit for her, so I put the blanket aside for a bit, and knit a quick grey cardie, that she could wear home from the hospital. 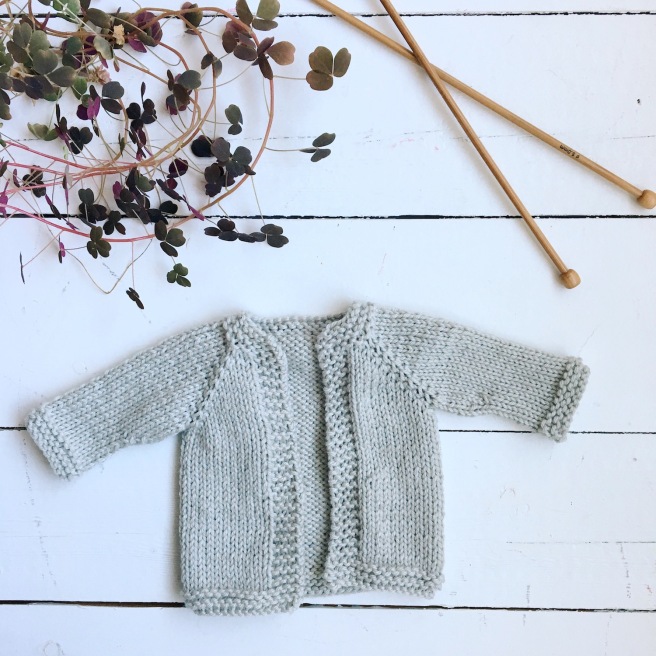 I followed a pattern I’d not tried out before, the bug warmer, by Tagia Hillard designs. It was a great knit, raglan style, and the end result was a perfect fit for a newborn and super easy to put on for a little winter baby.

I used a light grey Debbie Bliss Cashmerino Aran, which is super soft, lovely to knit, but also machine washable (an absolute essential, as far as I’m concerned, for baby clothes. It’s not just me who always has vomiting babies, right?!) All details, as ever, on Ravelry here: baby bug warmer.

I was so pleased with the result that I knit a second one for my sister-in-law’s new baby, who arrived a month later, in the same type of yarn but this time in dark grey.

I fully intended to pick up the blanket again and finish it, but, erm, that’s still to happen, and instead I moved onto another cardie once the grey one was outgrown. I’d spotted a lovely mustard yellow garter stitch cardigan in John Lewis and was convinced I could knit my own version, but then I struggled to find a decent pattern. In the end, I went for the Iceling cardigan by Carol Feller. It’s not garter stitch throughout, but has a huge garter front and turn ups at the sleeves.

My usual sewing-on-a-button-inertia struck once I’d finished the knit, so it sat about for nearly a month while I dithered over button selection, yarn selection (for a button. Yes, I know) and threw in some bog standard procrastination.

Eventually, though, I bit the bullet and sewed the little blighters on, and she has been wearing the cardie non-stop ever since. (That would be a better endorsement, of course, if she was actually old enough to choose her own clothes, ha ha.)

Once again, I went for the Debbie Bliss Cashmerino Aran, this time in a glorious mustard yellow. I love the slightly vintage look to the colour, matched with more modern big white chunky buttons.

I went for the six month size, which is a pretty good fit on her at nearly four months, but should have enough stretch in it to keep going for a while. Full details of the knit over on Ravelry: Iceling cardigan.

And finally, yes, isn’t this is a ridiculous amount of photos to show you one tiny little cardie, but, oh she’s too cute, I couldn’t resist – just look at those squidgy legs! Long-term readers might remember that I never usually share pictures of the kids here, but I’ve realised that they grow out of the baby stage so ridiculously quickly that she’ll probably be completely unrecognisable from these photos in a month or so…

And now, back to the blanket! I am determined to get it finished before winter is officially over…