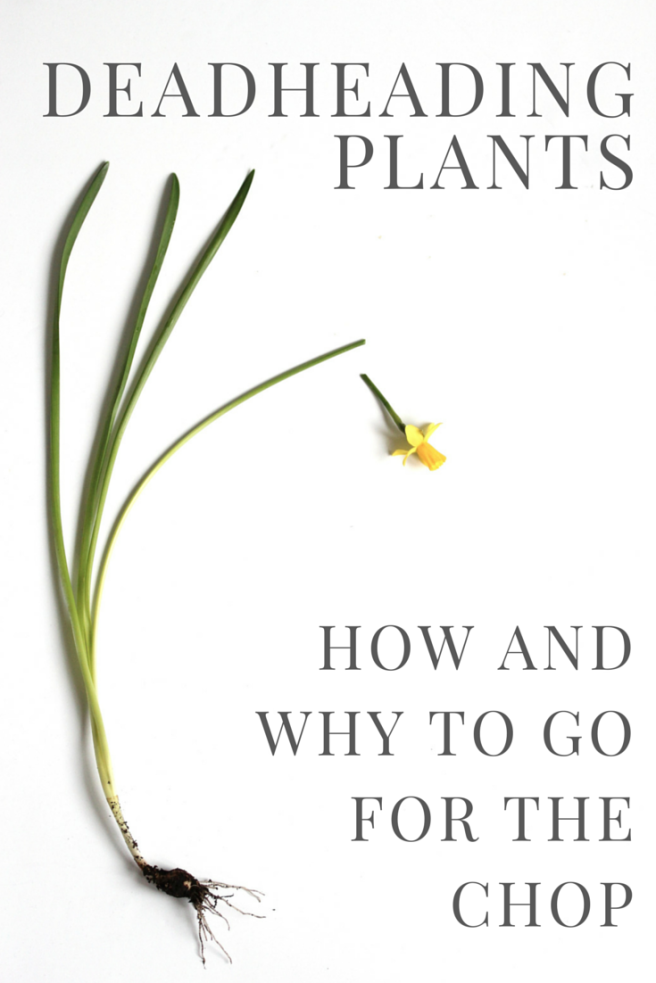 Now, it’s highly possible I was alone in this one, but before I started on my horticulture course the principle of deadheading eluded me somewhat.

Yes, I grasped the basics: deadheading meant removing old flower heads from a plant. But I never managed to find more information than that. How should I remove them? What should I use to remove them? At what point on the stem did I remove them? I wondered for a while if I was literally just meant to pull the old petals off and that was that…

Once I understood what the whole purpose of deadheading was, it suddenly all became clear.

The aim of deadheading is both to tidy up the plant (and prevent pests and diseases entering through old plant material) but also to keep the plant producing more flowers.

But it’s how it does that I found illuminating. The whole point of a flower on a plant is to help that plant reproduce. The flower attracts pollinators (bees and the like) who bring pollen to the plant’s sexy parts which (hopefully) then germinates. Once the pollen has germinated, the flower will die, and the plant will then start to produce seeds. The seeds in turn are dispersed and the plant reproduces and grows new plants elsewhere.

So, by cutting off the flower, but also, crucially, the emerging seed pod before the seeds have a chance to grow, you stop the plant achieving its desired reproduction aims and therefore instead of putting its energy into the seeds, it puts its energy into producing more flowers (to tempt the pollinators, to make more seeds etc etc.).

How (and where) to do deadhead

Once you know this, it becomes apparent where and how to deadhead: below the point of the seed. So, on an apple tree, for example (not that you would ever be likely to deadhead an apple tree!) the fruit of the apple contains the seeds, so you would chop it off just below this. The apple actually forms below the flower, so you’d be making sure to cut below this point.

In most flowering plants, the seeds form within the flower itself, so you just need to cut below the base of the flower.

My suggested idea of pulling off the petals, therefore, would have achieved absolutely nothing, since I would have left the developing seed pod in place and the plant would stop putting out flowers…

As to what to use to deadhead; this all depends on the size of the plant. As a general rule of thumb for all deadheading (and, indeed, all pruning) use a tool just sharp enough to cut the plant without exertion. This isn’t just to save yourself hard work, but also because a swift sharp cut is a clean cut for the plant. Labouring away making endless attempts to cut through a stem with the wrong tools can actually cause damage to the plant as you will have most likely damaged the parts of the stem you’re leaving behind – and this is when infection and pests love to come in and have a little party…

Which plants can you deadhead?

Of course, you can’t just willy nilly cut the flowers off every plant and assume they will grow hundreds more in their place. Sadly, it doesn’t work like that.

Lots of shrubs grown to produce attractive flowers will respond well to deadheading. Roses, camellias, rhododendrons and lilacs will all produce more flowers if you’re regularly removing the spent heads.

All plants that are grown as “cutting flowers” will produce more if you deadhead them, as essentially, cutting the flowers is doing exactly that. So if you’re growing sweet peas, for example, if you miss cutting any flowers that then turn into seed pods, do make sure you cut off the seed pods once you spot them.

Lots of herbaceous perennials (plants that come back year after year, but don’t have woody stems and die down in winter) will also work well with deadheading. I was astonished last year to see my alstroemerias (the ridiculously red plants above) put out a whole second batch of flowers late in the autumn, after I had just given them a good prune once I thought all the flowering was over.

Geraniums are another classic example of a plant that will flower for months on end, as long as you prevent it setting to seed.

Of course, there are so many plants, this is a really brief overview. If you’re adding a new plant to the garden, or just curious about what you have in there, it’s always worth taking a look either on the label or on the RHS website to see specific care instructions.

Also, there are some plants that you certainly wouldn’t want to deadhead.

Obviously, if you want to collect seeds from a plant then you’d leave them to create the seeds in the first place.

Similarly, lots of plants have striking seed heads that you might want to keep out for the winter, so they can catch the frosts and twinkle away in the low sunlight. Grasses, alliums and so on can all look pretty stunning if left to their own devices.

Also remember, if you’re growing roses for hips (the stunning Rosa rugosa in my front garden produces glorious fat red rose hips, for example) then don’t deadhead these – or make sure you at least leave some flowers in place – otherwise you won’t get any lovely hips in the autumn.

Above all, don’t worry too much about deadheading. Sometimes the ins and outs of the ways to treat all the different plants there are can feel a bit overwhelming and it’s easy to do nothing for fear of getting it wrong…

It really only takes a few seconds to check a plant online and find out whether or not to deadhead it. But if you’re not sure what the plant is, or you’re out in the garden wielding the secateurs and feeling snip-happy, well, you might as well just go for it. As long as you’re only removing the flowers, it’s pretty hard to damage the plant itself. If they don’t end up putting out any more flowers this year, they’ll almost certainly be fine before next year. And if it turns out they were an annual that won’t grow again, then it’ll be super quick to grow them from seed another time. Just stick the flowers you’ve chopped off into a nice vase and admire them on your kitchen table…

I do hope this helps! As ever, please feel free to ask any questions by leaving a comment below and I’ll do my best to answer.

{Plant pot sale}
Finally got all the kids back to school yesterday after their various bouts of Covid AND my jaw is at last starting to feel better (almost…) Planning on a little more hibernation this weekend and then hoping to be back to life on Monday. Oh but it was blissful sitting at home in silence yesterday, with no noise to be heard apart from the dog gently snoring…
I’ve been thinking about this for a while and have decided to take a break from the houseplants business for the start of this year. I’ve got quite a few things going on in my life at the moment (also the reason I haven’t been here on Insta much these past six months) which has meant I haven’t had the time I would like to properly dedicate to the houseplant boxes…
No resolutions for me in 2022, no words of the year, not even any “this year I could…” lists (usually one of my favourite things to do at the start of a year, but it still all feels too uncertain to dream right now). Just one small aim / goal / intention: to not let any more books into the house until I have read my way through my bedside TBR pile, which is shuddering dangerously and at imminent risk of either breaking my bedside table or falling onto me in the middle of the night.