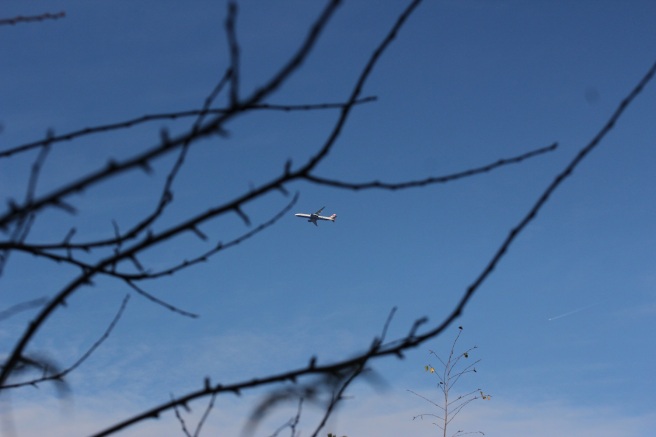 I do love an overnight frost and sun the next day. If only for the amazing ice shapes you can get out in the garden. 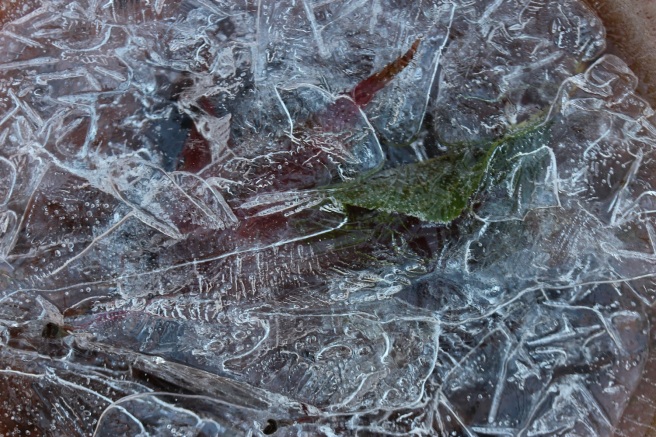 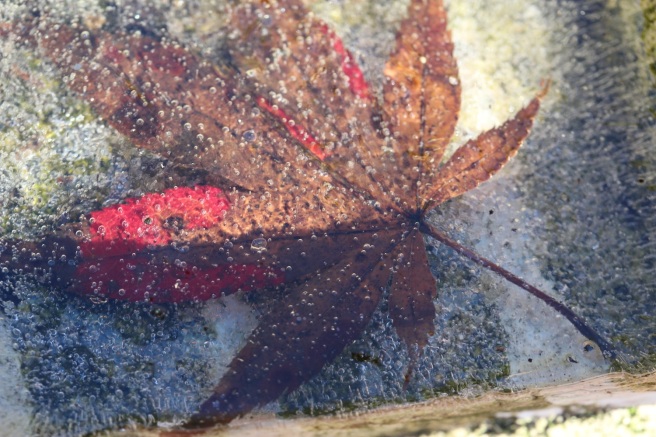 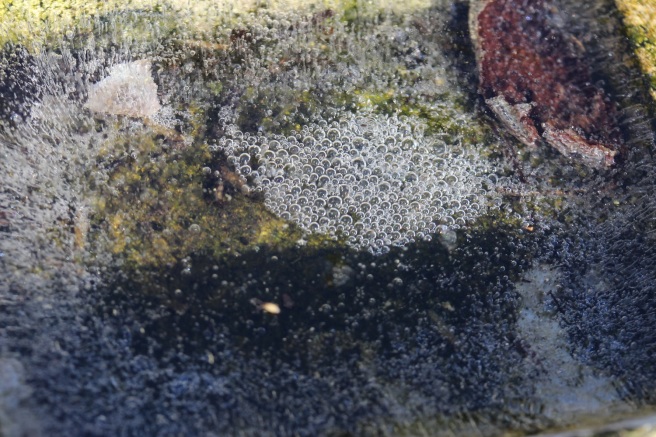 I snapped a few last weekend, delirious with excitement to see the sunshine. (While the poor old hubby was working away on the pond removal job…)

A few apples failed to fall off the trees and are just hanging on and rotting away. They’re irresistible to the parakeets from the park, who swing by, shrieking away, and grab a few bites, before retiring to a neighbour’s birch tree, which is their preferred resting place. We should probably count ourselves lucky they don’t like to perch here. 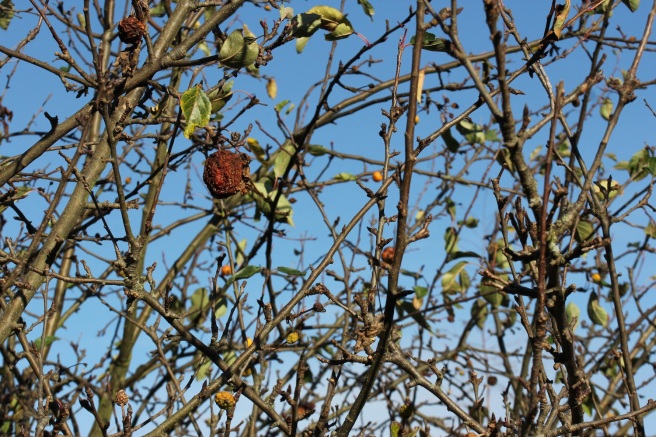 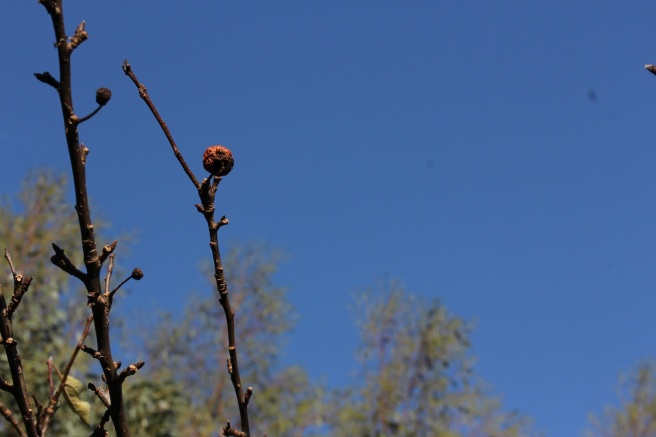 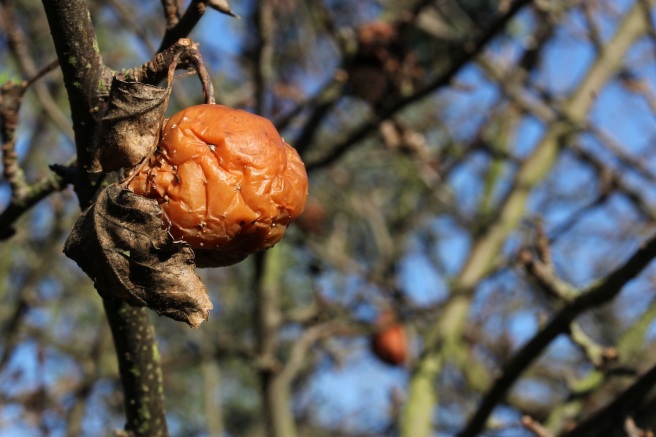 In the beds, my hardy old wallflower (Erysimum ‘Bowles Mauve’) is still putting out new flowers, even now in December. The Mexican daisies (Erigeron karvinskianus) are hanging on strong too; they’ve increased hugely over the last year and are dripping over the low stone wall looking as wonderful as I had imagined they would. 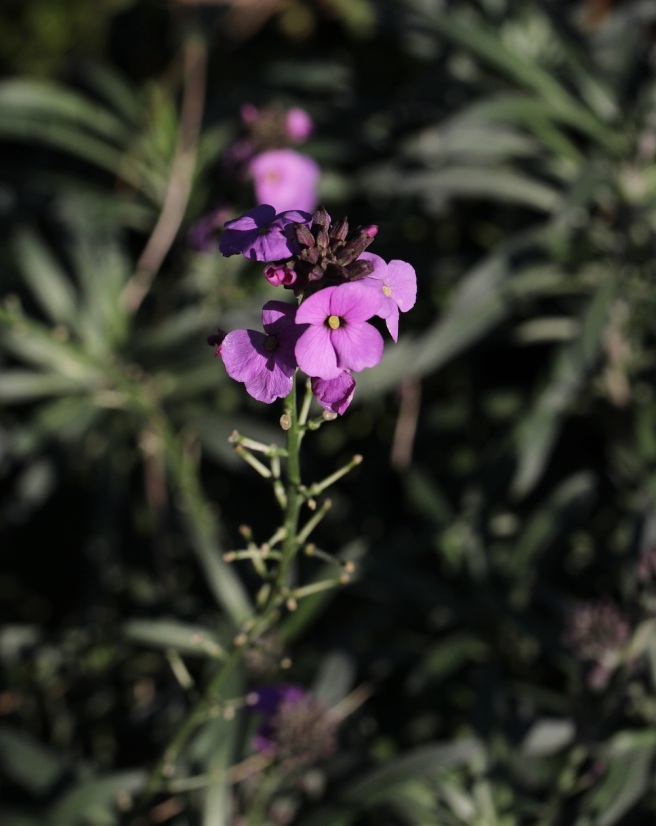 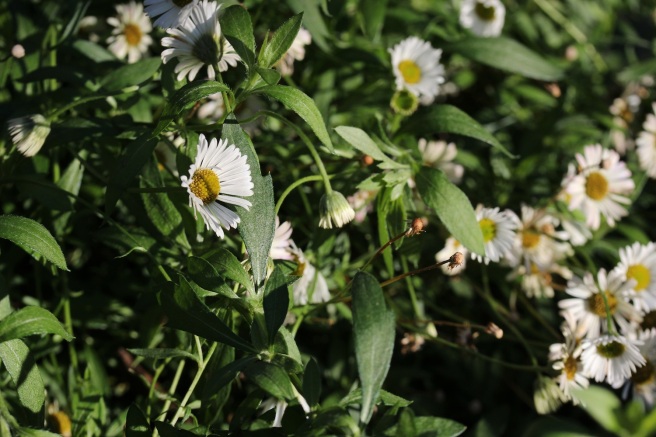 We’re taking the opportunity of the pond removal to get rid of an old, brown, shaggy, overgrown conifer that was planted behind it, and the great streams of ivy that were growing up it. We’ve battled ivy before, and I know now that the only possible answer is glysophate on the stump, but I really hate to use chemicals in the garden. Still, it’s either that or spend the rest of our weekends endlessly cutting it back in the hope it finally gives up.

It’s great for the birds, of course, and I love the look of the amazing seedheads, but it soon gets a stranglehold and kills off all its neighbours. 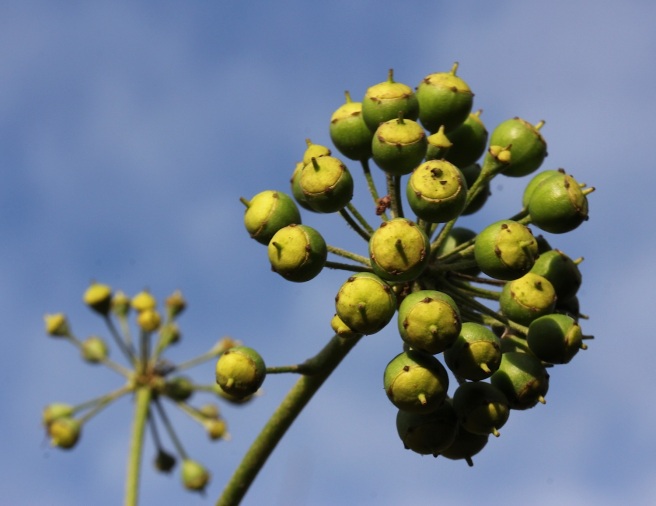 The magnolia in the front garden already has those adorable fluffy buds, and it reminds me that soon enough Spring will be here once again. I’m not really a fan of winter, I realise as I get older. I love the clear, crisp, blue sky days, of course, and the rare moment of snow, but the lack of sunshine really gets me down and I feel increasingly lethargic and sluggish as weeks pass by with only grey skies and rain. I’m sure it’s something to do with age, I don’t remember giving two shits about lack of sunshine in my 20s. I was probably too busy going out drinking in trendy clubs and sleeping in late. Sigh. 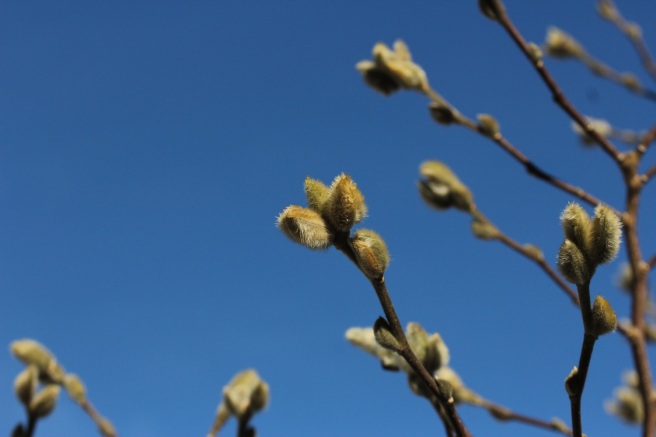 A few photos for my grid of the absolutely gorgeous aquamarine sea - pine trees combo from Mallorca last week.
The mantelpiece a few weeks back, basking in some Spring sunshine. This is just my very favourite time of year…
If you’ve followed me for a while, you may be remember me mentioning that I really hate driving. It makes me feel super anxious, especially with the kids in the car, and living in London definitely doesn’t help. I’ve been meaning to crack my fear for years now but never quite managed, but I’m determined to try and make some progress this year (it can be a huuuge pain always schlepping about with three kids on a bus).
Oh but I just love Spring. So happy to see these beauties back again this year (Narcissus ‘Bridal Crown’)…